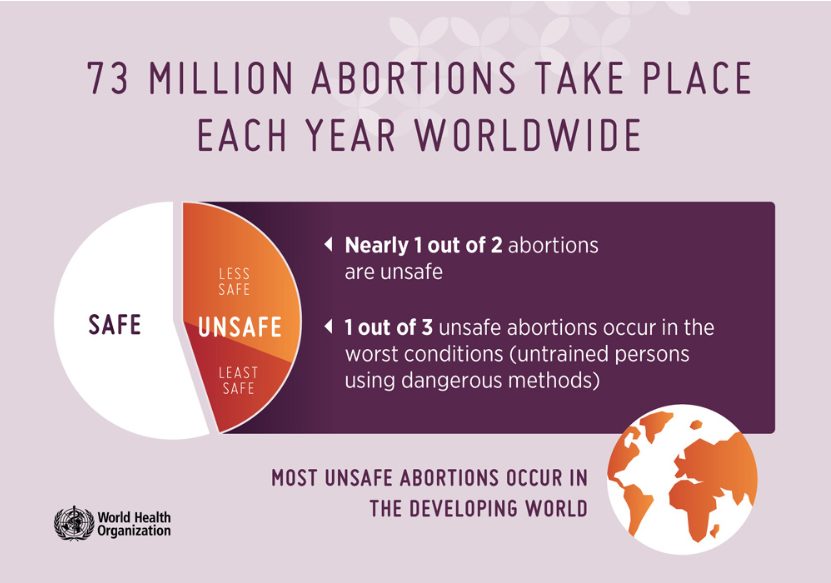 A blogpost on the website of a local radio station contains claims and information that are easily verifiable, but don’t appear to have been.

The blogpost was brought to the attention of Namibia Fact Check on 2 August 2022. Published under the headline ‘125 000 Abortions Recorded Every Year Globally: Expert’, the blogpost appeared on the website of Eagle FM on 1 August 2022.

The “Expert” referred to in the headline is someone called Sasha Louw, whose expertise is never established in the article. There is no explanation provided as to her paediatric or gynaecological, or any other medical, expertise that would denote her as an abortion expert. All that is stated about Louw is that she is the “founder of Pro-life Namibia”, an anti-abortion interest group.

But let’s say the headline is wrong, which is easily achieved by doing a quick Google search, then the question is: how accurate is the number of 125,000 abortions globally per day, as presented by Sasha Louw?

Sasha Louw’s figure seems to be outdated, for the current estimates of daily abortions are much higher than 125,000 as she claimed.

If one Googles the phrase ‘125 000 abortions per day’ then the first item that appears is a Worldometer article that states:

“The data on abortions displayed on the Worldometer’s counter is based on the latest statistics on worldwide abortions published by the World Health Organization (WHO).

“According to WHO, every year in the world there are an estimated 40-50 million abortions. This corresponds to approximately 125,000 abortions per day.”

However, in September 2017 the WHO estimated there to be about 55 million abortions per year globally, which would give an estimate of over 150,000 abortions performed per day.

For a more up-to-date estimate, in September 2020, the WHO estimated there to be 73 million abortions performed annually worldwide, which gives a daily figure of 200,000 abortions.

It is important to note that the abortion numbers are estimates, and that the estimates can vary considerably from year to year – some years the estimates are up, some they’re down – so it helps if estimates are verified with credible sources before publication by news organisations.

All of this could have easily been established by the journalist had she done a quick online investigation.

Namibian news media organisations damage their reputations and trustworthiness by uncritically publishing, in single-source articles, the statements of entities and individuals with clear idealogical agendas on sensitive topics such as abortion.

This was, in fact, pointed out by a Namibian social media user on 1 August 2022, after the link to the blogpost was posted to the Eagle FM Twitter feed.