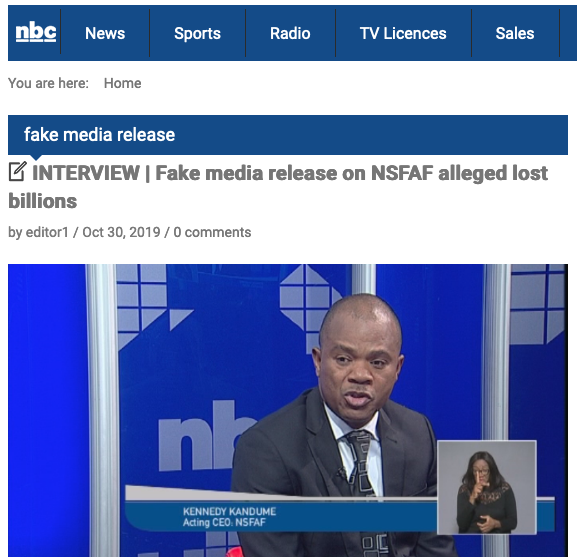 The Namibian information landscape is flooding with mis-/disinformation, propaganda and scams that are spilling over from social media.

Aside from political mis-/disinformation and propaganda, not to mention all the hate speech and tribalistic statements encountered these days, there generally appears to be an increase in false information circulating across and between Namibian news and information environments.

Following are some examples of such content that has been making the rounds between late October 2019 and mid-November 2019.

In late October 2019, a media statement that purported to be from the Namibian Student Financial Assistance Fund (NSFAF) spread around on various social media. The document indicated that the NSFAF lost billions of dollars over the years that had been earmarked to fund the tertiary studies of needy students, and that no further money would be available to fund students. But it was not a statement from NSFAF.

On 30 October 2019 the acting chief executive officer (CEO) of the NSFAF, which is a state-run entity, went on the Namibian Broadcasting Corporation (NBC) news programmes to dispel the false information. 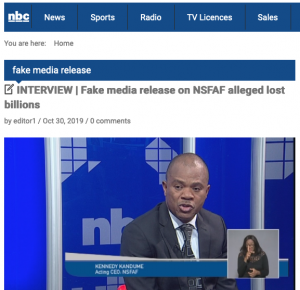 On 5 November 2019 The Namibian newspaper carried the following story: 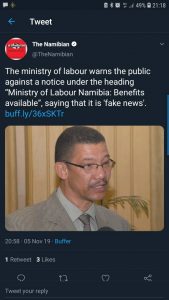 The fake statement purportedly emanating from the Namibian labour ministry called on all former staff to go to the ministry to collect N$30,000 that was owed them. 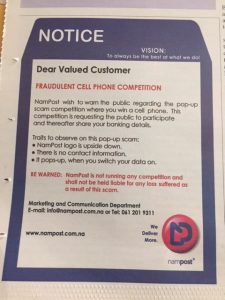 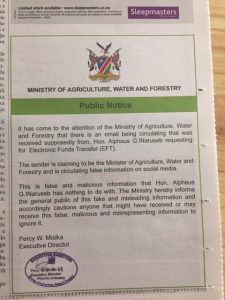 And on the same day, 7 November, a story appeared in all daily newspapers in which the Ministry of Environment and Tourism refuted a claim spread via a voice recording on especially WhatsApp that some Namibian national parks had been sold to Chinese investors.

In a version of the story published that day in the Afrikaans daily Republikein (image below), it was claimed that Chinese individuals were seen driving around in Namibian government vehicles in the Etosha National Park. In the story the claim was denied by the environment ministry. 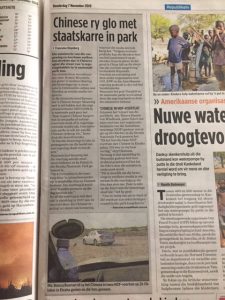 On the election front, the false information has especially been pervasive and confusing. Namibia will be having its National Assembly and presidential elections on 27 November 2019.

On 13 November 2019, the special elections were held for seafarers, the army, police and correctional service personnel, as well as at Namibian foreign missions around the world.

On the voting day photos appearing to be of results posted up at polling stations locally and from across the world started pouring across social media and WhatsApp. However, the Electoral Commission of Namibia (ECN) was not confirming any of it, so fake results lists – social media user generated lists – such as the one below, started circulating online. 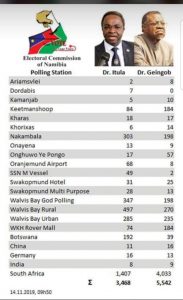 As the electoral picture increasingly looked murky as more and more results streamed in through the night of 13 and 14 November 2019, even seasoned journalists fell for some of the figures flowing among WhatsApp groups and onto social media. The example below is instructive: 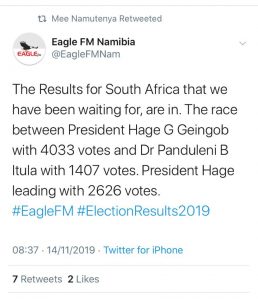 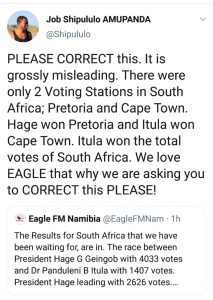 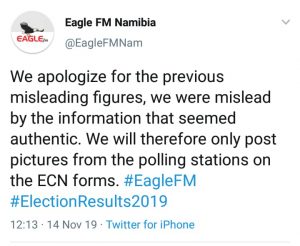 While all this was happening the ECN maintained its silence, but on the morning of 14 November 2019 it issued a statement in which it cautioned the public against believing the accuracy of the election outcome figures being spread around on social media. 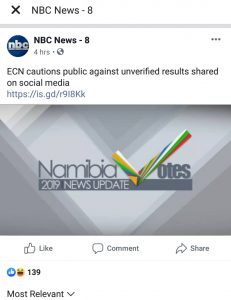 Despite this confusion, and the rising tide of conspiracy theories bandied about in WhatsApp and Facebook groups, some still (falsely) declared a winner: 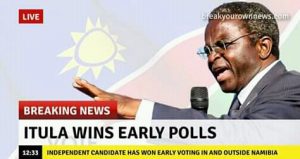 On 19 November 2019, the use of the electronic voting machines was being challenged in the Electoral Tribunal by the independent presidential candidate Panduleni Itula. The case was postponed 25 November 2019 for the verdict to be delivered, but almost immediately following the conclusion of arguments and the postponement, the ‘fake news’ started appearing, including the following: 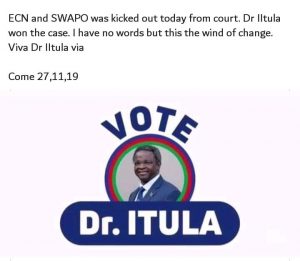 That same night, shortly after 11pm, large parts of the country suffered a power outage, and this too attracted ‘fake news’ almost immediately. On 20 November 2019 the following, just one among many conspiracy theories mimicking an actual news update by the Namibian Sun newspaper, circulated on social media and WhatsApp: 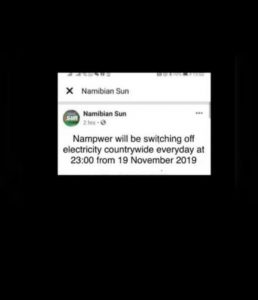 However, Nampower had already issued a statement (see below) early that morning explaining what had happened to cause the extensive power outage.

What does it all mean:

What all this indicates and illustrates is that ‘fake news’ – mis-/disinformation and propaganda – have fully penetrated and infiltrated all important news and information spaces and polluted such spaces, causing confusion and conflict. Such content is meant to provoke and disorientate audiences and authorities, and leads to conflict, judging by the engagements some of these examples have stimulated on social media and WhatsApp.

Given what’s happening, Namibians should be highly cautious about the information they engage and interact with on social media and especially in the ‘dark hole’ that is WhatsApp.