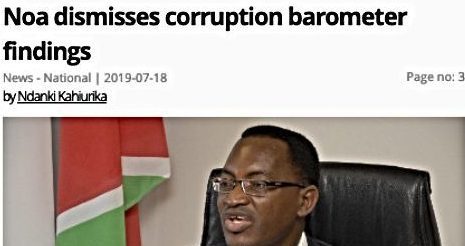 A recent newspaper report on the 10th Global Corruption Barometer contains numerous inaccurate statements and misrepresentations of the report, as well as demonstrating a lack of understanding of what informs the findings captured in the report.

The problematic newspaper article in question was published in The Namibian of Thursday, 18 July 2019, under the headline ‘Noa dismisses corruption barometer findings’ and appeared on the newspaper’s website on the same day (the link is posted at the end of this article).

There are numerous concerns with the report, starting with this statement:

“The Global Corruption Barometer is published annually by Transparency International, and surveys people in 107 countries on what their views on corruption are.”

In fact, the Global Corruption Barometer (GCB) report is not published every year, but every few years. The ninth edition of the GCB was released in November 2017. There has only been ten GCBs since the initiative was launched 16 years ago, in 2003, by Transparency International (TI)).

Another concerning statement was the following:

“It found that 78% of Namibians feel that corruption increased, while 65% feel that not enough is being done to tackle the scourge.”

Strictly speaking, it was not the GCB that “found” how Namibians felt about corruption, but rather the 7th round of the Afrobarometer survey, which for Namibia was conducted in November 2017. The GCB references Afrobarometer for the Africa section of the report.

Similarly, this quote from Anti-Corruption Commission executive director Paulus Noa was also problematic, in that it demonstrated a clear misunderstanding of what the GCB is:

“I was laughing when I saw it at first. Why do they not approach us, or those who work with cases like those so that they can get the real facts to base their survey on? We are able to give factual data and information so that their assessments are fact-based. Also, why do Namibians like to associate everything with corruption?” asked Noa.

The journalist did not interrogate Noa’s assertion about the “real facts”.

In light of this, to understand what the GCB is, the U4 Anti-Corruption Resource Centre, explains:

“As a barometer, the GCB measures the “pressure” of corruption based on people’s attitudes and experiences, not only with respect to governments’ effectiveness at dealing with the issue, but also regarding public readiness to stand up against corruption. We ask for example if people could imagine themselves getting involved in the fight against corruption, or if they would report an incident. It is based on an in-country survey, it is harder for governments to dismiss the findings compared to international surveys based on “expert” opinion.”

Also consider the following statement from the article:

It once again demonstrates that neither the reporter or the interviewee, “Ombudsman John Walters”, were familiar with the GCB, while discussing the easily establish able fact that the “methods used to collect such information” were the Afrobarometer survey.

Then finally, the article concludes with the following:

These are problematic statements because the report did not find increases in corruption, but rather captures the perceptions and experiences of Namibians about levels of corruption. Equally importantly, the Afrobarometer survey of November 2017 did not gather perceptions and experiences for the period 2015 to 2019, but only for the 12 months preceding the 7th round of the survey, so basically for the period November 2016 to November 2017. The GCB makes a comparison between the 6th and 7th rounds of Afrobarometer, which is what the 2015 to 2019 period mentioned in the news article was supposed to accurately refer to.

The newspaper article being discussed and analysed here can be accessed at the link: https://www.namibian.com.na/80922/read/Noa-dismisses-corruption-barometer-findings

The latest GCB can be accessed at the following link: https://www.transparency.org/gcb10/africa?/news/feature/global_corruption_barometer_gcb_africa_2019