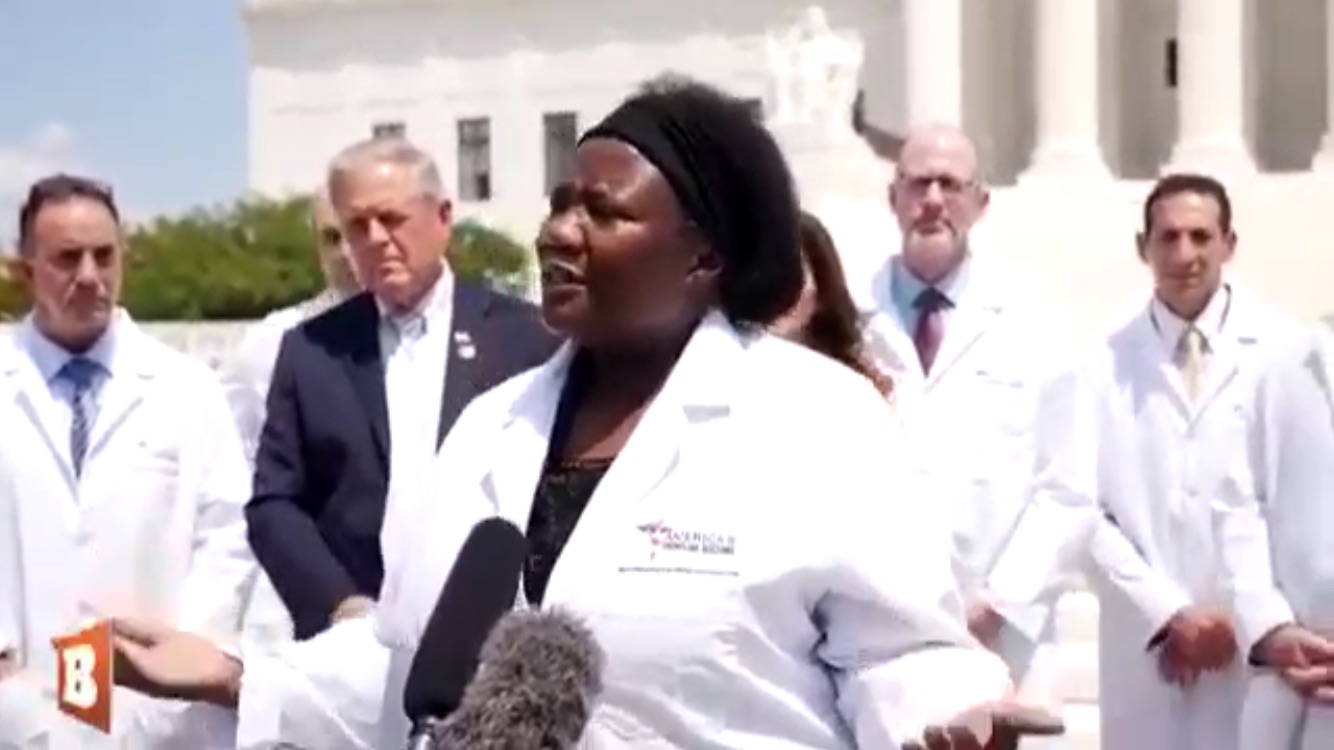 The viral videoclip of the US-based doctor making unproven and misleading claims stands as the prime example of how American political disinformation is fueling confusion around the global response to COVID-19.

This is a long-read.

An almost six-minute long videoclip in which the Houston, Texas, based doctor-cum-pastor Dr Stella Immanuel claims to have cured hundreds of patients with a concoction including the anti-malarial medication hydroxychloroquine has struck a cord with many Namibian social media users at a time that Namibia’s coronavirus infection rate has steadily risen and deaths have started to increase.

The videoclip is a segment of a longer broadcast on social media on 27 July 2020 that subsequently went viral first in the US and then globally, and that has since been removed for spreading falsehoods by all the major social media platforms. Fact checkers across the continent have also reported seeing the videoclip circulating widely in Facebook and WhatsApp groups from Kenya to Nigeria, and further afield.

In the days since the videoclip has started circulating it has become clear that many Namibian social media users have little to no idea of the circumstances and climate from which it emerged.

The person who has certainly attracted a lot of attention from all this is Dr Stella Immanuel, a Houston, Texas, based doctor who is also a pastor.

In the videoclip, without presenting any evidence then or since, Dr Stella Immanuel claimed to have cured hundreds of patients of COVID-19, the disease caused by the SARS-CoV-2 virus.

Dr Stella Immanuel also presents herself as a pastor at Fire Power Ministries and describes herself as “GOD’S WARRIOR PRINCESS (GWP)” and “God’s battle axe and weapon of war” on her Facebook profile.

“Dr Stella who grew up in a culture where open warfare with bold, generational demons and stubborn strongholds was commonplace, feels that violent prayer and open confrontation against the powers of darkness must be taught, learned and exercised by Christians for success and breakthroughs on various fronts in their personal lives, ministries and families.”

Dr Stella Immanuel, the pastor, also preaches about “demon sperm” and witchcraft being the causes of some medical conditions.

Aside from Dr Stella Immanuel, the other main actors in this viral disinformation episode to note are America’s Frontline Doctors and the Tea Party Patriots.

According to reports, America’s Frontline Doctors was only founded in mid-July 2020. The group’s website, which was active only from 16 July 2020, has expired and is no longer viewable, but an archived version of the website’s homepage states:

“American life has fallen casualty to a massive disinformation campaign. We can speculate on how this has happened, and why it has continued, but the purpose of the inaugural White Coat Summit is to empower Americans to stop living in fear. If Americans continue to let so-called experts and media personalities make their decisions, the great American experiment of a Constitutional Republic with Representative Democracy, will cease.”

For an in depth look at all the actors and individuals involved in this saga, view this article by US-based fact checker Snopes:

With regard to hydroxychloroquine, she states:

Hydroxychloroquine is an anti-malarial medication which was repeatedly touted by US president Donald Trump in March 2020 as a treatment for COVID-19.

However, since then various studies have shown that hydroxychloroquine had little, if any, curative effect as a COVID-19 treatment.

On 4 July 2020, the World Health Organisation (WHO) also announced that it had ceased trials of hydroxychloroquine as a treatment for COVID-19.

“The International Steering Committee formulated the recommendation in light of the evidence for hydroxychloroquine vs standard-of-care and for lopinavir/ritonavir vs standard-of-care from the Solidarity trial interim results, and from a review of the evidence from all trials presented at the 1-2 July WHO Summit on COVID-19 research and innovation. These interim trial results show that hydroxychloroquine and lopinavir/ritonavir produce little or no reduction in the mortality of hospitalized COVID-19 patients when compared to standard of care. Solidarity trial investigators will interrupt the trials with immediate effect.”

As for Dr Stella Immanuel’s other claims, she has presented no evidence or data of having cured hundreds of patients of COVID-19, and in fact has made inconsistent claims about the numbers, stating in the videoclip that she cured 350 patients, while stating on her Twitter feed that she’s cured 250 patients of the disease.

And her claim that masks don’t work is simply false, as laboratory and clinical studies show that mask-wearing successfully reduces transmission of the SARS-CoV-2 virus, and guidance from the WHO and the US’s Centres for Disease Control and Prevention (CDC), as well as other health authorities, also advise that wearing masks (cloth or medical), in combination with social distancing and hand washing / sanitising, plays a role in minimising the spread of the virus.

This is arguably the most important element to keep sight of in this saga.

American politics is tremendously divisive and this divisiveness has only deepened and entrenched since Donald Trump was elected US president in November 2016.

The Trump presidency’s handling of the COVID-19 pandemic since January 2020 has been widely criticised by US medical and scientific experts and has fueled the ‘culture war’ (a seemingly irreconcilable divergence of values, ideologies, beliefs and world views) raging between Democrats and Republicans, the two main political parties or movements in US politics.

The America’s Frontline Doctors–Tea Party Patriots spectacle, and Dr Stella Immanuel, feed into this divisive political climate and the Breitbart News press conference of 27 July 2020 was clearly aimed at propping up the electoral prospects of Donald Trump, who has been floundering in the public opinion polls of July 2020, in the run-up to the 3 November 2020 US presidential election.

The America’s Frontline Doctors–Tea Party Patriots push to have hydroxychloroquine recognised as a treatment, despite increasing evidence that it has no curative effect on COVID-19 patients at any stage of the disease, is inline with the US president’s intermittent promotion of the drug since March 2020.

It is important for Namibians, and other Africans, to realise that they are collateral damage in the Dr Stella Immanuel–America’s Frontline Doctors–Tea Party Patriots disinformation saga.

That is because the message was never meant for them, but was aimed at American voters. However, given the nature of social media, the divisive messaging and disinformation of US politics has spilled out of US social media and is increasingly polluting the entire global social media environment, negatively influencing or poisoning perceptions and sentiments on a range of socio-political issues in other parts of the world.

The internationalising of US political divisiveness and disinformation, especially in the COVID-19 context, is contributing – along with the disinfodemic onslaught being fueled by disinformation actors in other parts of the world – to increasingly muddying the global public health information and communication space at a critical time in the global response to the COVID-19 pandemic.