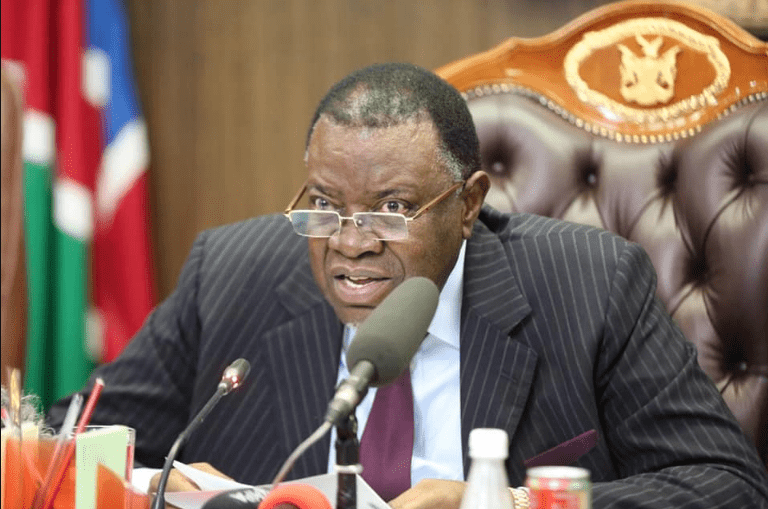 President Hage Geingob made various off-the-mark statements about corruption-related matters during his opening address at the first Cabinet meeting of 2020.

Towards the end of the speech, that was broadcast live on television and via social media on the morning of Tuesday, 4 February 2020, the president touched on recent high-profile corruption-related issues and cases, such as the Fishrot Files corruption scandal and Namibia’s latest ranking on the Corruption Perceptions Index (CPI) of Transparency International (TI).

The president mentioned that he went to an anti-corruption event in Rwanda at the invitation of Rwandan president Paul Kagame, but he didn’t mention what the event was or when it was. However, Namibia Fact Check has ascertained that president Geingob attended the ceremony of the 4th International Anti-Corruption Excellence Award, in Kigali, Rwanda, on 9 December 2019. Also present at the event was the Emir of Qatar, Sheikh Tamim bin Hamad Al Thani.

Here is a video of president Geingob speaking at the 4th International Anti-Corruption Excellence Award.

“After I explained and joked about Qatar, because Al Jazeera comes from there, and I said, the only thing I disagree with you, is you took time to air it during the elections campaign … during elections.”

This was with reference to a conversation president Geingob said he had with the Emir of Qatar at the Kigali, Rwanda, event during which he stated that Qatar-based Al Jazeera aired its Anatomy of a Bribe documentary, about the Fishrot corruption scandal, during the Namibian elections of 27 November 2019.

This is false. The Al Jazeera Fishrot documentary was broadcast on 1 December 2019, after the 27 November elections and after the results of the elections had officially been announced on the evening of 30 November 2019.

“We got one step up … one step up. We are in the top ten good countries dealing with corruption, fighting against corruption.”

This is clearly a reference to the 2019 CPI.

“One said Fishrot is not added yet. It is added.”

This was also with reference to a conversation at the Kigali, Rwanda, event during which the president alleged someone said that the Fishrot corruption scandal, which was exposed in mid-November 2019, did not influence Namibia’s ranking on the 2019 CPI.

This is mostly false. A country’s ranking is determined by an assessment of various data sources. The 2019 CPI document states on page 26:

“The CPI 2019 is calculated using 13 different data sources from 12 different institutions that capture perceptions of corruption within the past two years.”

Additionally, a country’s ranking is determined by assessing at least three (3) of the data sources.

While the 2019 CPI document does provide a brief overview of the Fishrot Files corruption scandal on page 24, it does not follow that the Fishrot scandal influenced Namibia’s ranking as most of the surveys and other data sources used by the CPI to determine country rankings were conducted and released well before the Fishrot Files became public in mid-November 2019.

The 13 different data sources used to calculate the CPI are the following:

In Namibia’s case, seven (7) of these sources were used to determine the country score and ranking. These sources are:

In the final assessment, based on the evidence available, Namibia Fact Check finds that president Geingob’s corruption-related claims made during the Cabinet opening speech of 4 February 2020 were mostly false.

UPDATED: To include seven sources used to determine the country score and ranking.