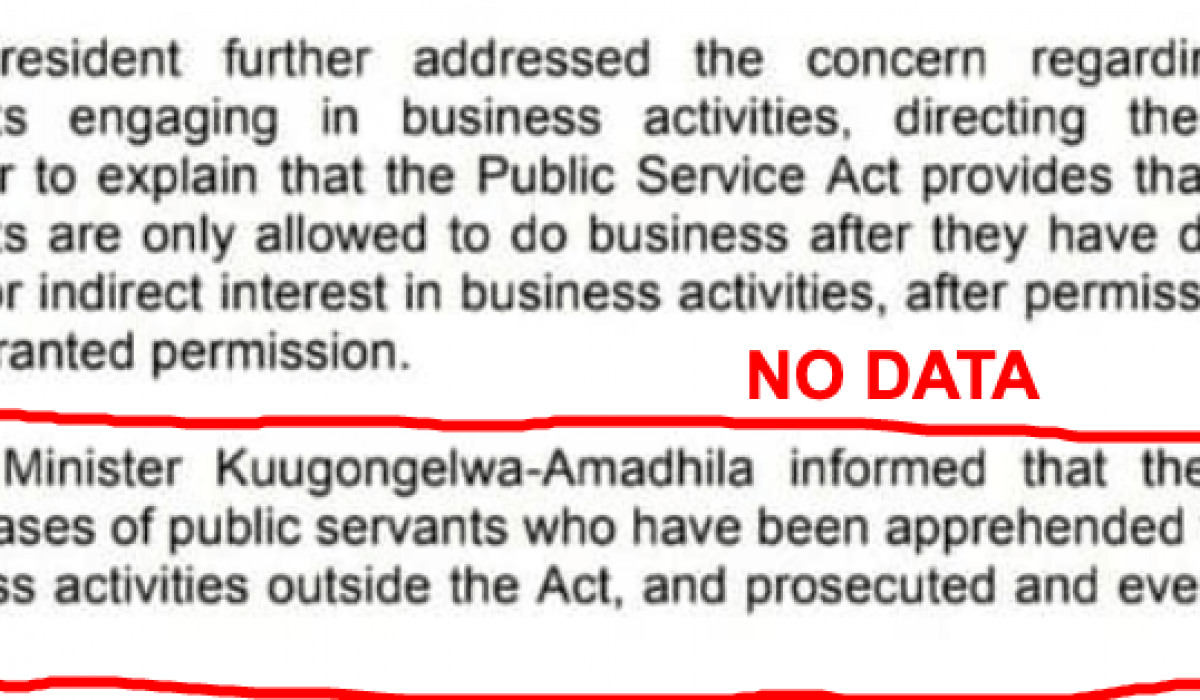 Despite acknowledging our information request, the Prime Minister’s office has been unforthcoming

One of the issues that came up during presidential town hall meetings since June is corruption in the public service.

At the Erongo region town hall meeting in mid-July 2019 at Swakopmund, president Hage Geingob was asked about public service corruption by a local community member.

A briefing document, issued afterwards by the Office of the President, of the discussions at the Swakopmund meeting, summarised the president saying the following about misconduct and corruption by civil servants:

The document goes on to summarise what the prime minister said about the issue as follows:

“Prime Minister Kuugongelwa-Amadhila informed that there has been cases of public servants who have been apprehended for their business activities outside the Act, and prosecuted and even found guilty.”

In the wake of the prime minister’s claims, Namibia Fact Check was requested to check whether what the prime minister said was evidence-based. On 24 July 2019 we sent an information request to the Office of the Prime Minister (OPM). The request was received and acknowledged by the OPM, but since then no information has been received.

Additionally, we scoured available annual reports on the website of the Public Service Commission (PSC), which is situated in the Office of the Prime Minister, for information related to the prime minister’s claims and our request. What we found was that while PSC reports do have sections addressing misconduct by civil servants, the website contained only annual reports of three financial years.

In the information request we forwarded to the Office of the Prime Minister we asked for the following:

When we made the initial request we did not know what period the prime minister had been referencing, so we did not specify for which or how many years we were requesting information.

It is against this backdrop that we label the prime minister’s claims as having No Data.

No, elephant dung is not a cure for COVID-19

FALSE: Al Jazeera’s ‘Fishrot’ documentary was not aired before the 2019 elections

TRUE: Until late 2019 there was no legal obligation on political parties to declare donations

No, clinical trials have not been completed for potential Russian COVID-19 vaccine

Denis Mukwege resignation not over orders to lie about COVID-19