Namibia has the most Chinese-built government buildings in Africa? Probably not 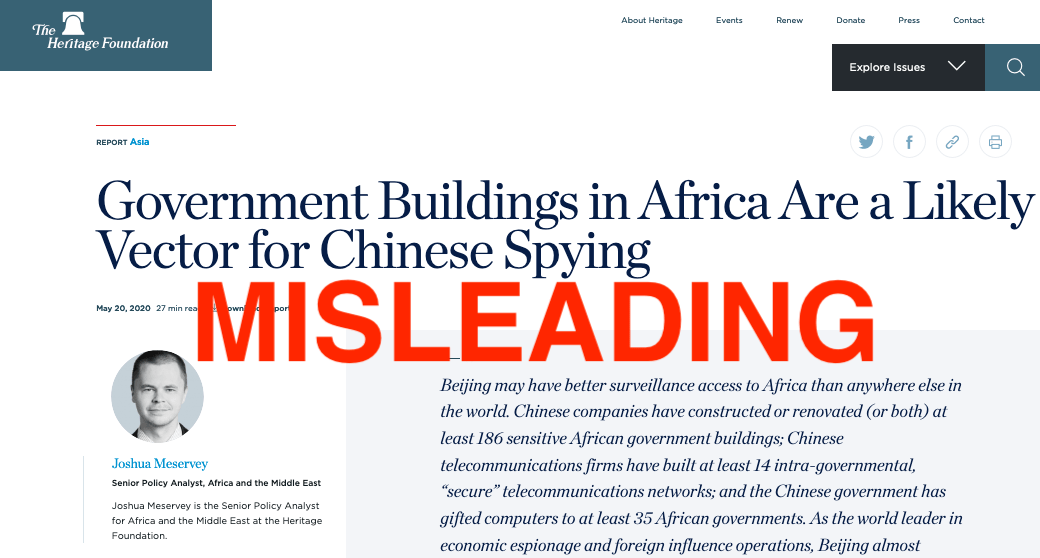 A right-wing American think-tank misleadingly places Namibia at the top of a list of African countries with most Chinese-built government buildings.

On 20 May 2020 the US-based Heritage Foundation launched a report – Government Buildings in Africa Are a Likely Vector for Chinese Spying – online that placed Namibia at the top of a list of 40 African countries with the most government buildings constructed by Chinese construction firms.

The Heritage Foundation report argues that Chinese-built government buildings across Africa present an entry point for Chinese state surveillance of African states and their development partners.

The report contains graphs and tables that misleadingly lists Namibia as the country with the most government buildings constructed by Chinese firms on the continent.

What is being said?

“There is also the attractiveness of the opportunity: Chinese companies have built, expanded, or renovated at least 24 presidential or prime minister residences or offices; at least 26 parliaments or parliamentary offices; at least 32 military or police installations; and at least 19 ministries of foreign affairs buildings. Having surveillance access to these buildings is an extraordinary opportunity for the CCP to gather intelligence directly from the highest levels of African governments. The opportunity is so enticing, in fact, that Beijing may have financed and constructed some of the buildings to improve its surveillance of certain governments.”

The following graphic appears right at the start of the report:

The following list appears in Appendix Table 1 in the Heritage Foundation report:

Since this report has appeared, Namibians have taken to social media to criticise the Namibian government and ruling Swapo Party. Among the critical on social media are prominent business and state sector leaders, such as Dr Leake Hangala, who is the chairperson of the Namibia Airports Company (NAC) that has had facilities built by Chinese firms in the past.

Who is saying it?

The Heritage Foundation describes itself as follows:

“The mission of The Heritage Foundation is to formulate and promote conservative public policies based on the principles of free enterprise, limited government, individual freedom, traditional American values, and a strong national defense.”

The foundation is hard right of American Republican politics and staunchly supports and influences the policies of the US’s Trump administration.

The Heritage Foundation has been instrumental in crafting US domestic and foreign policy under the Trump administration and this latest report appears to be in support of Trump administration efforts to rein in China on the world stage as relations between the two countries deteriorate on the back of collapsing bilateral trade ties and a blame-game over the COVID-19 pandemic.

Admittedly, the report author states up front in the report that data / information on the activities of Chinese actors in Africa is hard to come by. In this regard the report reads:

“Given the difficulty of gathering comprehensive data on independent China’s nearly seven decades of engagement with Africa, these numbers are almost certainly an undercount.”

On the issue of the under-count, Namibia Fact Check has determined that considerably more Namibian government buildings have been built by Chinese firms than the ones listed or counted (25) in the Heritage Foundation report. Others have also picked up on this, as the following Tweet indicates.

On the issue of accuracy, the report lists the “South West African People’s Organisation (SWAPO) Party headquarters” as a government building, which it certainly is not.

In light of the issues highlighted, it seems plausible that the only reason Namibia is identified in the report as the country with the most Chinese-built government buildings is because more information about the activities of Chinese builders, and other Chinese actors, in Namibia is more readily available (online) than arguably for most other African countries.

Thus, these issues probably apply even more to all the other countries mentioned in the report.

For instance, according to information published online by the China-Africa Research Initiative at the Johns Hopkins School of Advanced International Studies, Namibia is nowhere near the top African or even southern African countries – in terms of construction-related revenues of Chinese firms – in which Chinese construction companies have been active between 1998 and 2018.

While the Heritage Foundation report makes for compelling reading with persuasive arguments, it is clear that there are significant data and information gaps and quality issues that undermine the message and these issues make it a highly speculative report that should be considered and cited with caution.