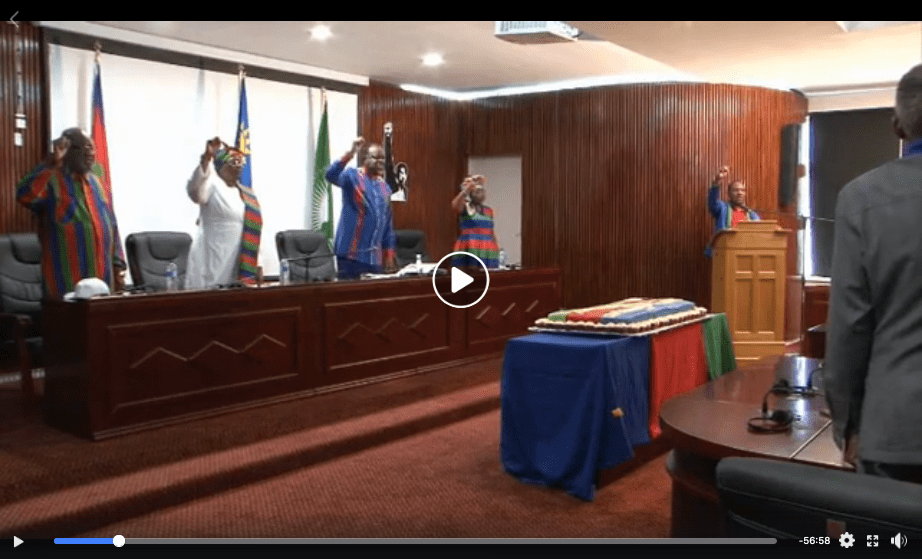 Here are the facts about the gathering that continues to haunt the ruling party.

On 19 April 2020 the ruling Swapo Party turned 60 years old and a birthday party was held on the day to commemorate the occasion.

However, at that stage in April 2020, Namibia had just implemented an extension of its lockdown brought on by the COVID-19 pandemic sweeping the continent and world.

The initial lockdown period affected only the Khomas and Erongo regions of the country and ran from 28 March 2020 to 17 April 2020. The extended lockdown applied to the whole country and commenced on 18 April 2020 and lasted until midnight on 4 May 2020.

So, clearly, the Swapo Party birthday gathering fell almost in the middle of the combined lockdown period stretching from late March 2020 to early May 2020.

Given that the gathering took place during the lockdown, the party came in for considerable criticism on social media.

The reasons why the Swapo birthday party attracted criticism are as follows:

In the days following the ruling party’s birthday event, two opposition political parties lodged separate cases against the party for violating the lockdown regulations. At the time of publication a police investigation was underway into the circumstances of the gathering.

What do the regulations say?

This is what the regulations of 17 April 2020 have to say about “public gatherings”:

In email correspondence on the regulations, justice minister Yvonne Dausab provided the following clarifications in April 2020:

“1. For the purposes of the regulations and the period of the lockdown, a public gathering is defined in accordance with two main elements:

* It is a gathering of more than 10 people for a collective purpose.

* And for the duration of the lockdown public gatherings are prohibited.

2. But a gathering of more than 10 people is only allowed in the following instances:

* if people find themselves coincidentally( i.e they did not plan it ahead of time), at a specific place at the same time, for example in a queue at an ATM or in a supermarket or open market, or where they receive food rations/parcels.

* or if people are at the same household as a family( this does not include visitors and friends).

3. And when gathering the persons are expected to adhere to measures to combat, prevent and suppress the spread of COVID 19 i.e. social distancing, hygiene and where applicable protective gear i.e masks.”

What are the facts?

From the available evidence, Namibia Fact Check has managed to establish the following facts:

The Swapo birthday gathering was not an exempted “public gathering”

Clearly, the event was not a household, funeral, unplanned or accidental gathering, nor a meeting of a government institution, Cabinet or parliament at which a critical matter of national importance had to be discussed.

When contacted for information and comment on this matter, Swapo Party executive director Austin Samupwa, who was also present at the occasion, stated the following:

“No permission was required because we complied with lockdown regulations.”

There were clearly more than 10 people present at the event, even if you excluded the media and security personnel, as the following images attest to:

The purpose of all these images is to show that, if checked carefully, there are 25 people visible or partially visible, and a few others mentioned but not seen. These people include media and security personnel (which could be argued as having been there in their capacity as critical services personnel).

The footage – of the official program which lasted just over an hour – these images were taken from is a Facebook Live video posted to a Facebook page titled Dr. Hage Geingob, of which the description reads: “Official Facebook Page of Dr. Hage Geingob, the President of the Republic of Namibia, and SWAPO Party President”.

Despite this evidence, Swapo executive director Samupwa has maintained to Namibia Fact Check that there were only 10 people present at the event, including himself.

The list of 10 guests Samupwa revealed to Namibia Fact Check is the following:

However, this list does not include Hilde Gwandani Daniel and Meriam Hidipo, a Swapo Party Youth League (SPYL) representative acknowledged as being present by Swapo secretary general Sophia Shaningwa, and at least one representative of Swapo’s Ndilimani Cultural Troupe. Altogether, the individuals wearing or bedecked in Swapo colours (including caterers, aside from the woman wearing the brownish dress) of some sort in the visuals and images come to 15, including the 10 official guests listed by Samupwa.

“We complied with the issue of social distancing and adhered to the required number of attendees. There were only ten people inside as other people, including journalists, were asked to wait outside.”

Concerning this statement and especially the last sentence, of other people and journalists being “asked to wait outside”, the footage shows that this was not the case, as the media appeared to be in the room throughout the hour-long event. The same appears true of security personnel and catering staff at the event.

Social / physical distancing was mostly adhered to during the event

While there were some obvious lapses, for the most part the footage shows individuals maintaining prescribed distances among themselves. 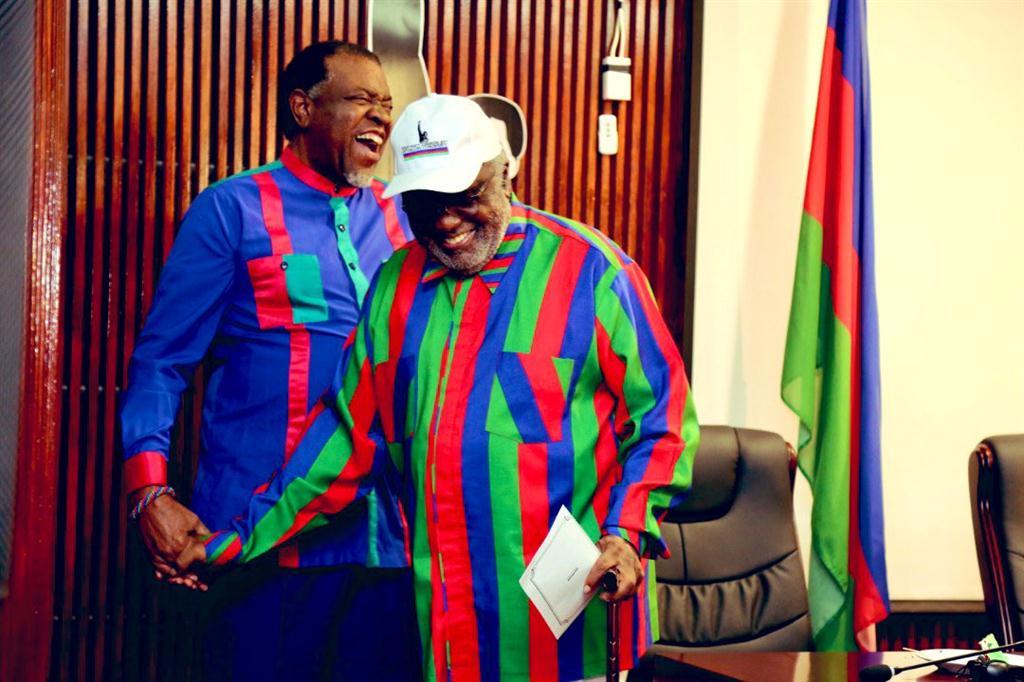 President Geingob and former president Pohamba received criticism for touching in this picture.

The visual evidence indicates that the Swapo Party acted in contravention of the lockdown rules as the birthday party was attended by more people than are allowed at a public gathering, according to the regulations published in the Government Gazette.