US conspiracy theorists have become ‘influencers’ on Namibian social media 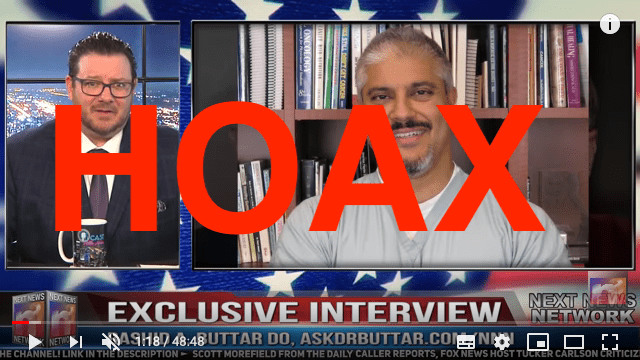 Pushing pseudo-scientific narratives and US right-wing talking points on COVID-19, Namibians and other Africans appear to have become captive to these hoaxers.

Spewing conspiracies falsely linking 5G technology to the outbreak and spread of the novel coronavirus, to riling up anti-vaccination sentiments and casting tech billionaire Bill Gates as the mastermind of an evil population control conspiracy that includes the World Health Organisation and other multilateral entities, these hoaxers are primarily pushing story-lines that reflect US political divides. Most of these conspiracy theorists are pro-Trump (as in supporters of US president Donald Trump) and promote narratives that are meant to reinforce a Trumpian worldview, which often clashes with facts and reality.

The COVID-19 ‘infodemic’ has seen these conspiracy theorists have something of a global ‘moment’ as fear and uncertainty has followed the COVID-19 pandemic around the world, exploiting distrust in governments and the media, health information gaps and deficits and universally weak and low understanding of scientific and medical topics.

Who is spreading these conspiracies?

In April 2020 Youtube videos from a channel called Next News Network started doing the rounds on Namibian social media.

These videos – of Next News Network ‘anchor’ Gary Franchi in conversation with a ‘Dr’ Rashid Bhuttar and a Dr Shiva Ayyadurai – have racked up millions of views by promoting various falsehoods and hoaxes about the COVID-19 pandemic and how health authorities are responding to the global health crisis.

Next News Network appears on a list of fake news websites on Wikipedia and Media Bias / Fact Check rates it as having a right bias, stating of such a rating:

“These media sources are moderately to strongly biased toward conservative causes through story selection and/or political affiliation. They may utilize strong loaded words (wording that attempts to influence an audience by using appeal to emotion or stereotypes), publish misleading reports and omit reporting of information that may damage conservative causes. Some sources in this category may be untrustworthy.”

And a February 2018 article on the spread of conspiracy theories over Youtube, The Guardian describes Franchi and his channel in the following terms:

The channel is run by anchor Gary Franchi, once a leading proponent of a conspiracy that claimed the US government was creating concentration camps for its citizens. It was the Next News Network that broadcast the fabricated claims about Bill Clinton raping a teenager, although Franchi insists he is not a fake news producer. (He tells me he prefers to see his channel as “commentating on conservative news and opinion”.)

As for Franchi and his channel’s latest offerings, Right Wing Watch, which monitors right wing activists and media in the US, had the following to say:

“Conspiracy site Next News Network went a step further on April 16, publishing a long interview with Dr. Rashid Buttar who, as Media Matters noted in its report on the video, “proceeded to push multiple falsehoods and conspiracy theories,” including the claim that not a single death had actually been demonstrated to be caused by the COVID-19 virus. Bhuttar claimed that social distancing guidelines defy “every logical aspect of science and medicine.”

Buttar is a discredited osteopath who promotes false conspiracy theories about Covid-19.

And an 8 April 2020 debunk article by HuffingtonPost of the Franchi-Bhuttar Youtube video said the following of Bhuttar:

“What his audience may not know is that he has been formally reprimanded by the North Carolina Medical Board for unethical conduct, including giving cancer patients treatments that were “wholly unproven and wholly ineffective,” and ordering tests that “were never adequately justified” but were used to “drive up costs.” The Food and Drug Administration once sent him a warning letter for deceptively advertising his supplements as drugs. A former patient also sued him for fraud, alleging that Bhuttar recommended a costly and ultimately ineffective cancer therapy.”

As for Dr Shiva Ayyadurai, who is not a medical doctor, a 15 April 2020 BuzzFeedNews article briefly described Ayyadurai as follows:

“Most recently, Ayyadurai has cultivated an online following among anti-vaxxers and other pseudoscience communities. He is also part of a right-wing campaign to discredit (Dr Anthony) Fauci. They are falsely claiming that Fauci is working with former secretary of state Hillary Clinton and the deep state to cause an economic collapse and discredit President Donald Trump.”

What are they saying?

GroundUp, in its 6 April 2020 article, stated of Bhuttar’s comments in one of the Youtube videos:

In a 20 April 2020 article, US media monitoring website Media Matters, had the following to say about Bhuttar’s claims:

Bhuttar proceeded to push multiple falsehoods and conspiracy theories throughout the video. He pushed the absurdly false claim that “nobody has yet demonstrated a single death from the actual virus” and also falsely said that “the number of deaths are still less than the seasonal flu.” Additionally, Buttar claimed the death count was being inflated, although experts agree the death total is likely being undercounted, and he claimed that there was fake activity at hospitals. Buttar also said “studies clearly show that if you’ve had a flu shot you’re going to test positive for COVID-19,” which is another falsehood that has spread over social media.

The Media Matters article gives a detailed run-down of the numerous false claims Rashid Bhuttar makes and repeats in both the Youtube conversations with Franchi.

And in its 8 April 2020 article, HuffingtonPost stated:

“Like others exploiting the pandemic, he has promoted unproven (and disproven) COVID-19 remedies, discredited public health officials and sowed doubt about the safety of a future coronavirus vaccine — the key thing experts say will save countless lives. He has also propagated already debunked falsehoods about the effect of 5G technology on the immune system, and disparaged Dr. Anthony Fauci, the nation’s leading infectious disease expert, who has been so inundated with threats that he now requires an enhanced security detail.”

As for the claims of Dr Shiva Ayyadurai – who is running for a US senate seat in Massachusetts in 2020 – he is a COVID-19 denialist and an anti-vaccine activist, with a seemingly intense dislike for Dr Anthony Fauci, the leading infectious disease expert in the US and the director of the US’s National Institute of Allergy and Infectious Diseases (NIH). Ayyadurai is behind the #FireFauci movement that is calling on US president Donald Trump to dismiss Dr Anthony Fauci.

In the Next News Network Youtube video, Ayyadurai basically makes much the same claims as Rashid Bhuttar about the existence of an elaborate conspiracy, with Anthony Fauci at the center of it all, involving Bill Gates, the Gates Foundation, the World Health Organisation, ‘Big Pharma’, and the US’s Centres for Disease Control and Prevention (CDC). Despite not being a medical expert, Ayyadurai refers to the growing medical knowledge and responses to COVID-19 as “fake science” and he also promotes unproven or discredited vitamin remedies as the best way to treat COVID-19 infection. The World Health Organisation (WHO) maintains that there is no treatment or cure for COVID-19.

Why this is dangerous

The danger of conspiracy theories and theorists in times of health crises is that they can dissuade people from listening to or following the advice of credible experts and getting the right assistance and treatment. Conspiracy theories prey on people’s senses of fear and uncertainty in times of collective stress and can lead to heightened confusion and panic.

For instance, despite there not being a vaccine yet that could mitigate the spread of the SARS-CoV-2 virus, anti-vaccine movements are already being fired up via social media platforms and giving prominence to the pseudo-scientific claims of the likes of Rashid Bhuttar and Shiva Ayyadurai, which could have serious implications for public health in developing countries such as Namibia that are struggling to bring various infectious diseases under control.

It is for this reason, that Namibian social media users are encouraged not to heed the claims of conspiracy theories, but to seek out expert guidance and credible sources of information when encountering claims they are unsure of, instead of just ‘forwarding’ or ‘sharing’ them, thereby spreading the ‘infodemic’.

COVID-19, Coronavirus hoax, disinformation
PrevPreviousDecoding the criminalising of COVID-19 disinformation
NextBill Gates caught in the eye of the ‘infodemic’ stormNext