Madagascan remedy is not a proven COVID-19 cure 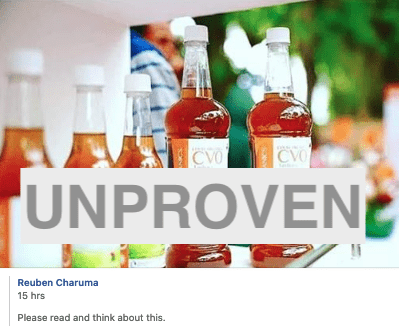 A remedy touted by the Madagascan president has caused quite a stir but its effectiveness as a COVID-19 treatment remains unconfirmed and people are advised to be cautious of curative claims.

Updated on 5 May 2020 to include a statement from the WHO Africa.

African social media has gone slightly wild since the launch of a traditional herbal drink called Covid-Organics by a Madagascan entity whose French name translates in English to Malagasy Institute of Applied Research (IMRA).

Namibian social media has not been spared the excitement and claims around Covid-Organics.

While it’s not exactly clear when in April 2020 the herbal drink was launched, a BBC report from 22 April 2020, reported the Madagascan president Andry Rajoelina to have said the following of the curative effects of Covid-Organics at the launch event, at which he reportedly officiated:

The BBC report included comment from the World Health Organisation (WHO):

“In response to the launch of Covid-Organics, the WHO said, in a statement sent to the BBC, that the global organisation did not recommend “self-medication with any medicines… as a prevention or cure for Covid-19″.”

“As efforts are under way to find treatment for COVID-19, caution must be taken against misinformation, especially on social media, about the effectiveness of certain remedies. Many plants and substances are being proposed without the minimum requirements and evidence of quality, safety and efficacy. The use of products to treat COVID-19, which have not been robustly investigated can put people in danger, giving a false sense of security and distracting them from hand washing and physical distancing which are cardinal in COVID-19 prevention, and may also increase self-medication and the risk to patient safety.”

Also widely reported was the immediate response of the National Academy of Medicine of Madagascar (ANAMEM), which was quoted as stating:

“The scientific evidence that this is effective has not been proved. It’s likely that it could actually harm the health of the population, particularly that of children,”

On 25 April 2020 it was reported online by Midi Madagasikara, following a meeting between president Rajoelina and officials of ANAMEM, that ANAMEM had declared the following in a statement about the use of Covid-Organics:

Thus, “the National Academy of Medicine of Madagascar does not oppose its use in the form of Tambavy”; while clarifying that “Covid-Organics is not a medicine but an improved traditional remedy”.

Tambavy is a generic name for traditional Madagascan herbal teas or plant-based infusions.

If the first statement by the National Academy of Medicine of Madagascar was shocking for public opinion, the second, meanwhile, tends to silence the doubts that have been raised. It remains to be seen whether the effects will be the same.

It should be noted that none of the reports about Covid-Organics discuss clinical trial data concerning the safety and effectiveness of the touted remedy.

According to various reports, the main ingredient of Covid-Organics is Artemisia, which the online Encyclopaedia Britannica describes as follows:

“Artemisia, (genus Artemisia), any of a genus (Artemisia) of aromatic herbs and shrubs in the Asteraceae family. Examples include wormwood, sagebrush, and tarragon. Many species are valued as ornamentals for their attractive silvery gray foliage, which is frequently used in horticultural plantings to create contrast or to smooth the transition between intense colors. The leaves of common wormwood (A. absinthium) have been used in medicines and beverages such as absinthe and vermouth. An extract from the Eurasian A. annua is used to treat quinine-resistant malaria.”

In a 29 April 2020 online report by Midi Madagasikara the Malagasy Institute of Applied Research (IMRA) stated of the ingredients of Covid-Organics:

“Covid-Organics is made up of 62% Artemisia and other medicinal plants with antiseptic properties, a bronchial thinner used in the composition of traditional remedies for years.”

Artemisia forms part of anti-malaria treatments, and the WHO states on its pharmaceutical use:

“Today, the most widely used antimalarial treatments, artemisinin-based combination therapies (ACTs), are produced using the pure artemisinin compound extracted from plant Artemisia annua. Currently, all malaria strains globally can be treated with at least one of the ACTs recommended by WHO.”

However, the WHO position on the non-pharmaceutical use of Artemisia is:

“Following an extensive evidence review on the effectiveness of non-pharmaceutical forms of Artemisia, conducted in 2019, WHO has issued a new position statement on this issue with a clear message: WHO does not support the promotion or use of Artemisia plant material in any form for the prevention or treatment of malaria.”

To be clear, Madagascar’s Covid-Organics is a non-pharmaceutical remedy.

That said, the Malagasy Institute of Applied Research (IMRA) isn’t the only institute looking to Artemisia as a potential answer to the COVID-19 disease.

On 8 April 2020, days before the launch of Covid-Organics in Madagascar, Germany’s renowned Max Planck Institute announced that it would be conducting laboratory tests using Artemisia extracts and derivatives to treat cells infected with COVID-19.

“The cell study testing will be conducted in research institutions in Denmark and Germany with the plant extract from Artemisia annua and pure derivatives isolated from the plant such as artemisinin. Treatments containing an artemisinin derivative, artemisinin-based combination therapies (ACTs), are now standard treatments worldwide for malaria. Artemisia annua extracts show very little toxicity and artemisinin-based drugs are widely used to treat malaria even in newborns.”

In light of all the above, Namibia Fact Check could find no clinical trial evidence to substantiate claims about the curative effects of Covid-Organics and cautions against proclaiming such effects, as such claims could amount to spreading disinformation.

For another useful fact check of the claims surrounding Covids-Organics, see this informative fact check by Africa Check.