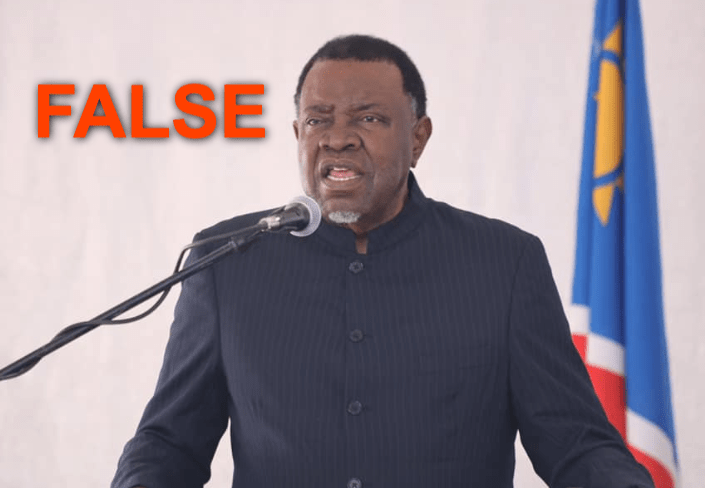 As Namibia gears up for elections in November 2019, President Hage Geingob has been travelling the country for town hall meetings to connect with voters.

On 15 August 2019, the Namibian Sun newspaper reported on one such meeting at Khorixas in the Kunene region on 14 August 2019. At the event, the president claimed his party Swapo (formerly the South West Africa People’s Organisation) had lost the former Kavango region in the 1989 independence election.

The newspaper quoted the president saying:

“We googled; we like to do research and just to look at the first elections, the results for the Kavango, who claim they voted for Swapo, it’s not true, it was terrible. We lost Kavango basically terribly.”

In a recording provided by the Namibian Sun journalists, the president can be heard saying:

“We googled – we like to research things – just to look at the first elections, the results in Kavango, who say they voted for Swapo. It’s not true, it was terrible. We lost Kavango, basically, terribly. The DTA was stronger.”

In the same article, the Namibian Sun debunked the president’s claim: “However, the election results in Kavango showed that 27,256 people had voted for Swapo, while 22,046 had cast their ballots for the DTA.” (Note: The Kavango region has since been split into Kavango East and Kavango West.)

Was the president wrong and Namibian Sun right?

The Electoral Commission of Namibia’s website does not carry the result of the November 1989 vote. Africa Check found it on page 52 of the post-election edition of the Namibia Handbook and Political Who’s Who.

It shows that Swapo won the then Kavango region by a clear majority in the independence election. The numbers – 27,256 votes for Swapo and 22,046 votes for the DTA – quoted by Namibian Sun are correct.

Presidential press secretary Alfredo Hengari did not respond to repeated requests for comment on our finding.

This fact-check was produced as part of an Africa Check fellowship completed by Frederico Links, editor of Namibia Fact Check.