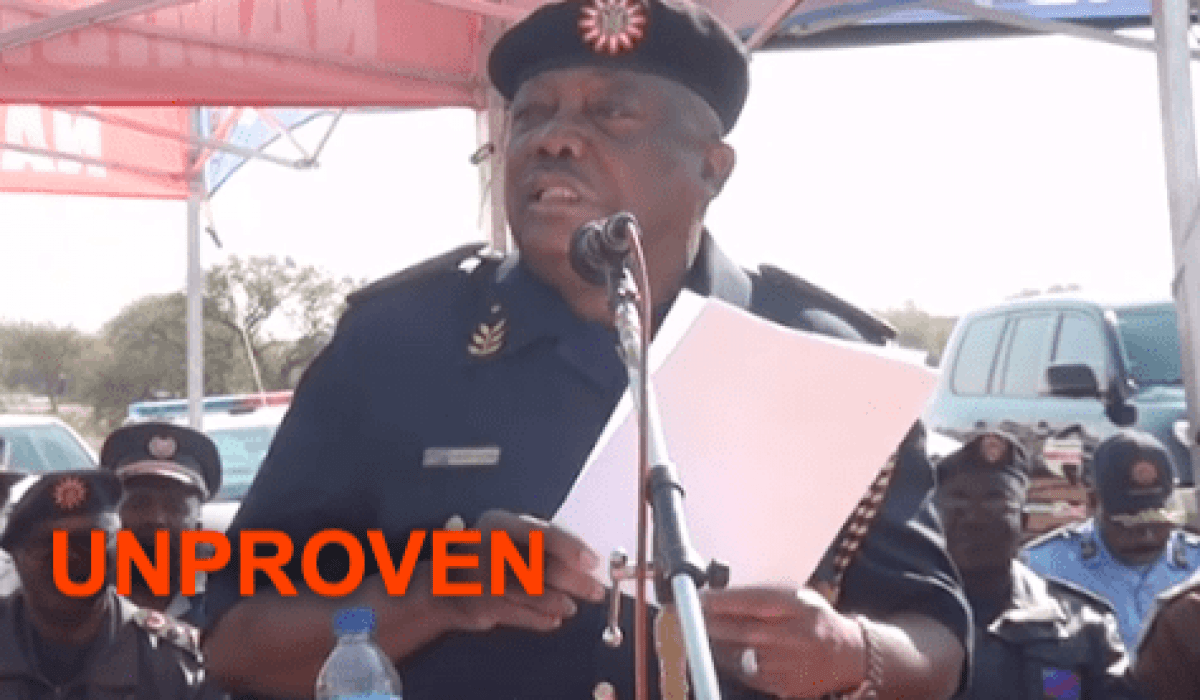 In mid-August 2019 the second phase of the joint police and military crime-fighting operation, Operation Kalahari Desert, was launched.

During the launch event of phase two of Operation Kalahari Desert, Namibian Police (Nampol) Inspector General Sebastian Ndeitunga stated that allegations of misconduct and brutality leveled against law enforcement and military personnel involved in the previous phases of the operation – including Operation Hornkrantz, which preceded the current operation – had been investigated and it was concluded that many were “unfounded or fabricated”.

A One Africa TV video clip of Inspector General Ndeitunga saying this can be viewed here on Youtube or here on Facebook.

What Ndeitunga said was:

“There were a few incidents of alleged unprofessional conduct made against the law enforcement operatives. Among those cases includes alleged misconduct by law enforcement officers on operation, which were investigated and the result of many of these claims were either, emphasis, were either unfounded or fabricated. People who have a mouth that are turned into factories to fabricate lies. Factories mouth to fabricate lies!”

Namibia Fact Check approached the office of the Inspector General and the head of Nampol public relations, Commissioner Edwin Kanguatjivi, for information on the cases of alleged police misconduct that were “unfounded or fabricated”. Despite repeated requests for such information Nampol has not been able to provide the information to date (if and when the information is received, this report will be updated).

One of the individuals who suffered alleged law enforcement brutality in the previous phases of the joint Nampol and Namibian Defence Force (NDF) crime-fighting operation since the end of 2018, is Luise Mwanyangapo, who works in Namibian civil society. Mwanyangapo was brutally beaten by military personnel during the precursor to Operation Kalahari Desert, Operation Hornkrantz, which ran from late 2018 to the beginning of 2019.

When she heard the Inspector General’s comments, she stated the following in an email to Namibia Fact Check:

“I have instructed my lawyers to institute action for damages against the NDF and Nampol for the assault I suffered at the hands of their officers during the so-called Operation Hornkrantz. My lawyers are in the process of instituting the said action. With respect to the police investigation, I am not aware of any such investigation. I am aware that the NDF carried out an internal enquiry, at which I was called to testify. The outcome of this enquiry was not shared with me. I am, however, not surprised that internal investigations by the police and the defence force would result in these two forces finding that their officers have done nothing wrong. I would like to make it clear that I did not make up or fabricate the assault and reject any suggestion to the contrary.”

Similarly, the Legal Assistance Centre (LAC), in response to the comments of Inspector General Ndeitunga, stated:

The LAC “currently has 33 reported cases on police brutality. 12 of these cases can be and are linked to the joint operations by the police and the NDF. 1 has been filed, the other 11 are to be filed, pending the settling of the founding documents. The rest of the police brutality cases await further and/or full instructions and records from the clients to determine merit and if we can take it on, or the cases have no relation to the operations as they predate the operations or occurred in cells/holding facilities.”

The LAC continued that:

“These cases are for civil damages. In most instances, we already filed our preceding notice to the relevant Ministries that we intend to file suit, we are finalising the particulars, after which we will do so.”

The one case that the LAC has already lodged with the courts is that of David Amaambo, who is suing the Namibian government for brutality suffered at the hands of Nampol and NDF officers during the first phase of Operation Kalahari Desert in early 2019.

The case number for ‘David Dave Amaambo vs Government of the Republic of Namibia’ is HC-MD-CIV-ACT-DEL-2019/03738 and the case documents can be viewed on the Namibian eJustice system here.

Poem minister Shiimi quoted is not from 1819

No, Africa is not free, democratic or without war and unrest

No, Namibia is not a ‘drunkard society’

Why COVID-19 is not bio-engineered

Madagascan remedy is not a proven COVID-19 cure