No, the US Supreme Court has not canceled COVID-19 vaccinations 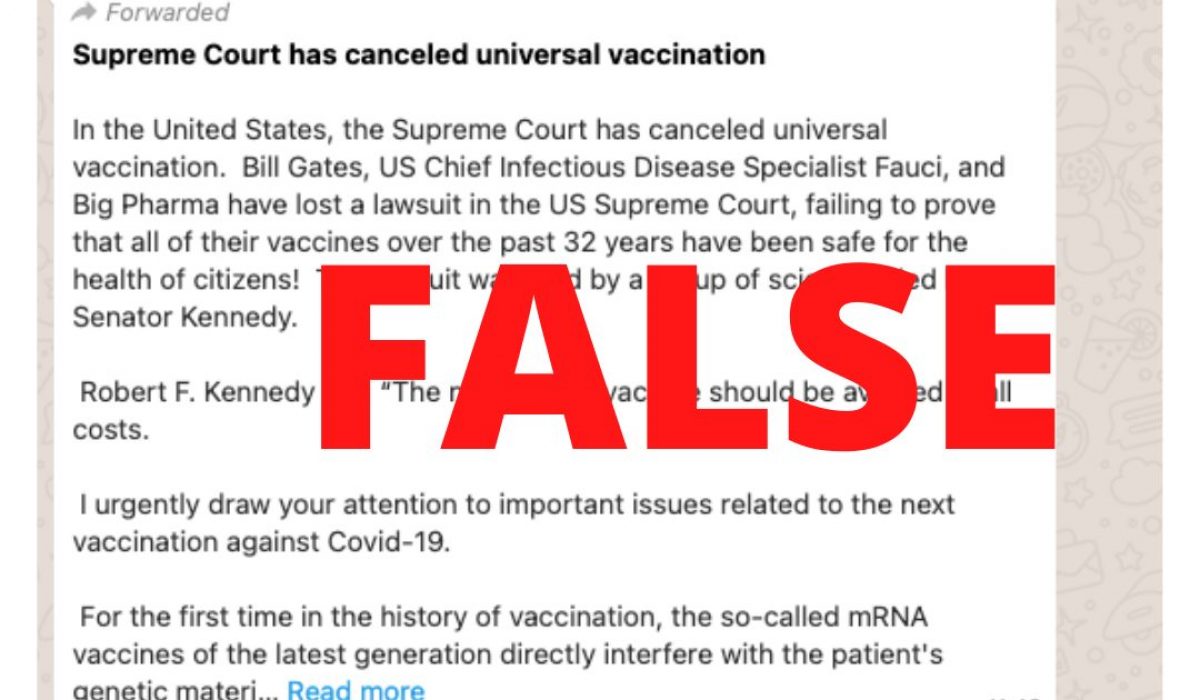 So, here’s some more American anti-vaccine disinformation swirling around in Namibian social media and WhatsApp groups.

In this latest viral post, the anti-vacciners claim the US Supreme Court has “canceled universal vaccination”, and then goes on to make various other false claims about COVID-19 vaccines.

The viral post, as is common for such posts, does not indicate who or where it comes from, is riddled with grammatical errors and is poorly written, all of which should be an indication that it is disinformation.

In case you missed it (or in case you’re one of those sharing it), here’s some of the text of the anti-vaccine post:

So, what’s the truth?

Well, no credible news source anywhere has reported a story at any point about the US Supreme Court having “canceled universal vaccination”. Such a major decision by the US Supreme Court would have been reported by all major (and minor) news outlets around the world by now if it had actually happened. The fact that no such reports (aside from poorly written social media posts) exist should surely be evidence enough that no such decision was made by the top US court.

But you don’t have to take our word for it, you can go and check on the US Supreme Court website, under Opinions of the Court – 2020, whether any such decision has been made (the answer is a round NO, of course).

To just give an example of some of the other numerous falsehoods, aside from there being no recent US Supreme Court decision on vaccines, in the opening paragraph the post states:

The truth is that Robert F. Kennedy Jr. is neither a scientist nor a US senator. He is a lawyer and prominent US anti-vaccine spokesperson.

The falsehood-riddled post has been debunked by US and other fact checkers.

Here’s a really comprehensive fact check by AFP Fact Check and here’s another one of the same post by Indian fact checker BOOM Live.

Once again, Namibians are encouraged not to just forward or share posts or content on social media and WhatsApp. The aim of anti-vaccine disinformation is to discourage people from getting vaccinated against COVID-19, which could have serious health consequences for individuals and society.

No, COVID-19 vaccines do not cause coronavirus variants

No, steaming every day for a week will not cure COVID-19

No, COVID-19 vaccines do not make people magnetic

No, there is no ‘COVID-19 Emergency Relief Fund’ grant