EXPLAINER: Tale of a mistaken tally 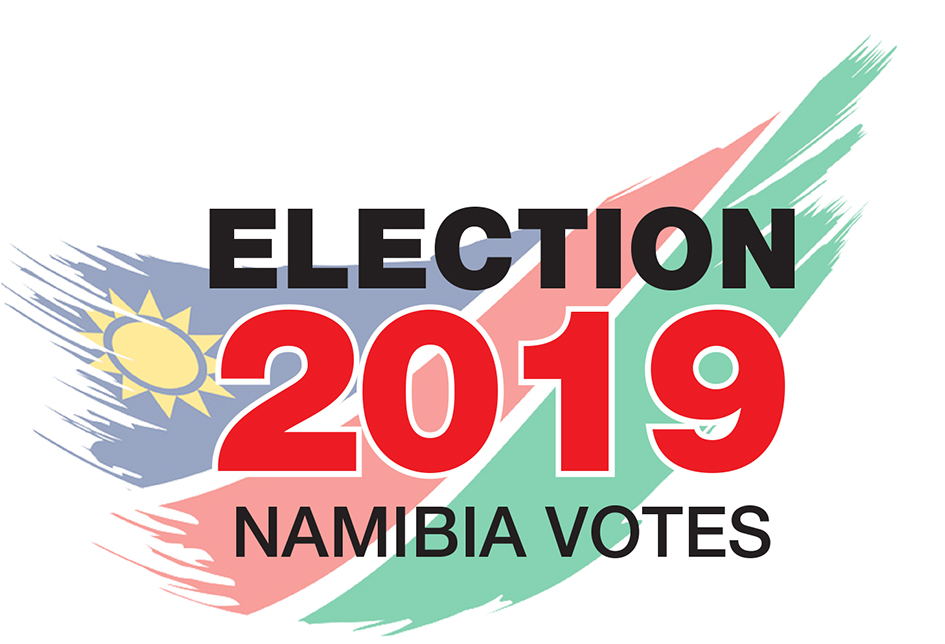 A wrong constituency vote allocation has caused considerable public consternation in the wake of the 27 November 2019 presidential and National Assembly elections.

This is the account of how Namibia Fact Check picked up that the wrong vote tallies in the Windhoek Rural constituency had been allotted to presidential candidates following the 27 November 2019 polling day.

On 27 November 2019, voters in the Windhoek Rural constituency voted in both the presidential and National Assembly elections.

On the afternoon of 28 November 2019, state-owned newspaper New Era reported the presidential election results for the constituency (image below) on its Twitter feed.

On the evening of 30 November 2019 the final results for the presidential and National Assembly were announced by the Electoral Commission of Namibia (ECN).

While the Windhoek Rural constituency results did not stand out at the time, when Namibia Fact Check started doing its own review and number crunching of the elections results in the days following 30 November 2019, it soon picked up on the anomalous nature of the results of the constituency. On the afternoon of 4 December 2019, the following result reflected on the ECN election results website, election.na, which differed markedly from the result reported immediately after polling day, which clearly showed that independent presidential candidate Panduleni Itula had won the presidential election in the constituency.

Aside from the fact that the posted results were different from what was published, what mostly stood out about the result, and ultimately raised flags of suspicion, was how large the difference was between the voter turnout for United Democratic Front (UDF) presidential candidate, Apius Auchab, and the support for his party, as reflected in the above and below screenshots taken of the Windhoek Rural constituency results pages on the ECN website on the afternoon of 4 December 2019.

Namibia Fact Check reported and raised the issue on its various social media pages on that same afternoon (image below). The social media post attracted much engagement on various platforms, including WhatsApp, throughout that afternoon and evening. 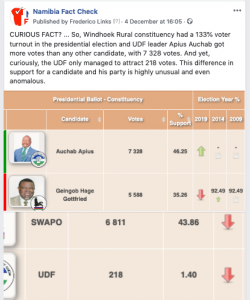 And then, shortly after midday on 5 December 2019, the result of the presidential election was quietly changed to reflect that the independent presidential candidate, Panduleni Itula, had in fact won the Windhoek Rural constituency (image below) as the first reported results had indicated, but the numbers were still different from those initially reported. 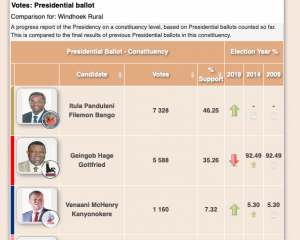 Once again, shortly after the changed result appeared online on 5 December 2019, Namibia Fact Check reported this (image below) on its social media pages. This post attracted even more engagement online and went viral on Namibian social media pages and was again widely shared on WhatsApp groups. 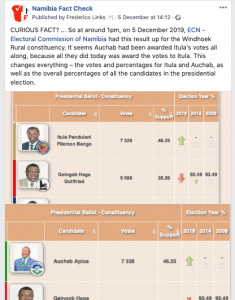 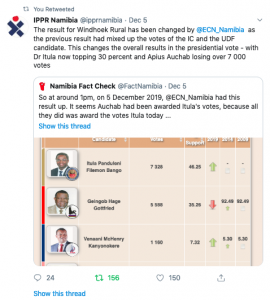 And the IPPR called (image below) on the ECN to pronounce itself on what had happened that caused such differing results to be posted for the constituency. 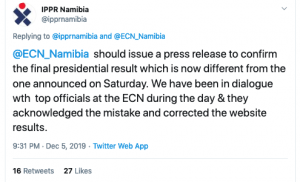 In the wake of this series of events, the handling of the Windhoek Rural constituency presidential election result has become a lighting rod for criticisms of the ECN. That electoral authorities have not come forward and been transparent about what had happened and why three different results were reported for the one election in one constituency has seemingly deepened widespread distrust – as evidenced by comments and confrontations still raging online at the time of writing this post on 9 December 2019 – of the officially declared results of the 27 November 2019 elections.

*DISCLAIMER: Namibia Fact Check is a project of the Institute for Public Policy Research (IPPR).