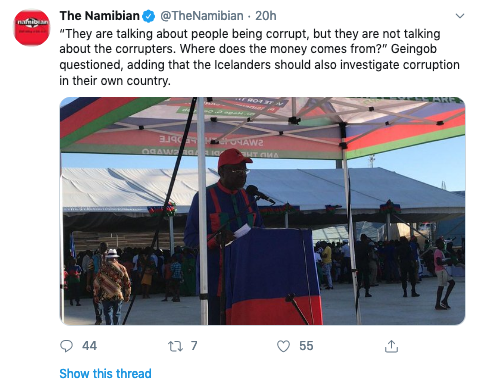 President Geingob wrongly made it sound as if the investigations of alleged international corruption were only targeting Namibians.

At the ruling party’s last rally in Windhoek, on 23 November 2019, before the 27 November 2019 parliamentary and presidential elections, president Hage Geingob spoke about the fallout from the Fishrot corruption scandal, which saw two of his Cabinet ministers recently resign over their alleged involvement in large scale fisheries related corruption. 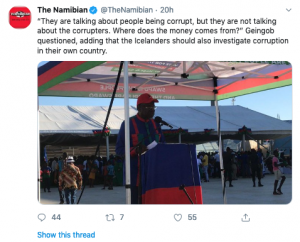 And then he reportedly claimed the following: What president Geingob was basically claiming was:

On both scores, a quick Google search of the Fishrot saga will reveal both that investigations have been launched in Iceland and elsewhere, and that in Iceland and other places the focus of media coverage is not so much Namibia or the Namibians implicated, but the Icelandic fishing company at the center of the scandal, clearly demonstrating the inaccuracy of the Namibian president’s statements.

To illustrate, in terms of investigations, on 13 November 2019 – 10 days before president Geingob’s assertions – international news service Reuters reported (image below) that an investigation had been launched in Norway into how suspected corrupt payments from Icelandic fishing company Samherji had been channeled through the Norwegian state-owned bank DNB. On 14 November 2019, international news network Al Jazeera reported (image below) that Samherji’s CEO had been suspended pending a company investigation into the transnational corruption allegations.

The same day, various international fishing industry sources (image below for demonstration) started reporting the story of the alleged Samherji corruption and the company CEO’s downfall.

And then on 19 November 2019 – four days before the Namibian president’s statements – an Icelandic media company reported the following:

While there are many more stories available online about the Fishrot transnational corruption scandal, the examples spotlighted here serve to indicate that president Hage Geingob’s assertions were clearly inaccurate, as most of the international coverage clearly pointed to investigations being underway in Iceland and elsewhere and, secondly, that most of the international media coverage was focused on the Icelandic fishing company and not the implicated Namibians or Namibia’s ruling Swapo Party.

Incidentally, on the day that president Geingob made the claims, in Iceland a large crowd had gathered (see image below) in a demonstration against the alleged corruption of the Icelandic fishing company, and to demand accountability in the affair.

In light of all this, president Hage Geingob’s statements at the ruling party election campaign rally on 23 November 2019 have been found to be clearly false.