State House recently produced a percentage figure that is completely at odds with the one mentioned in April’s State of the Nation speech.

This happened in a strongly worded statement on 9 November 2019 in response to The Namibian‘s editorial of 8 November 2019, in which the newspaper had criticised president Hage Geingob’s re-appointment of former deputy minister in the vice presidency, Hilma Nicanor, to a ministerial advisory role in the same ministry. 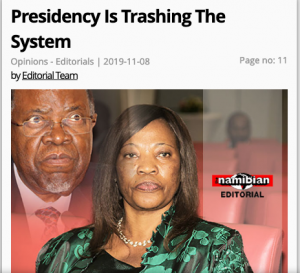 The re-appointment of Nicanor followed her resignation from the deputy minister position in order to comply with the Electoral Act of 2014, which states that those standing for parliament may not be in the employ of government when they have been included in a party’s list of parliamentary candidates.

The Namibian‘s editorial can be accessed here and the presidency statement, issued by State House press secretary Alfredo Hengari, can be viewed here.

In the statement of 9 November 2019, Hengari says the following:

“Even when The Namibian seeks clarity, expurgation of the contextual explanation is always fait accompli. The Namibian will not bother to contextualize that public office bearers account for 0,4% of the wage-bill.”

Hengari was referring to the percentage of the public service wage bill which is accounted for by political office-bearers.

Namibia Fact Check had previously attempted to fact check what percentage of the public service wage bill made up the salaries and benefits of political office-bearers.

This followed when during his State of the Nation (SONA) speech in the National Assembly chamber on 17 April 2019, president Hage Geingob made the following statements:

“However, contrary to popular belief, the Total Wage and Benefits of Political Office Bearers represents N$160 million out of the 29 billion Namibian Dollar Wage Bill. Said differently this is 0.06 percent of the Public Service Wage Bill, including both houses of Parliament.”

The president was referring to state spending on the wages and benefits of public office-bearers, who are sometimes also referred to as political office-bearers.

These figures appear on page 16 of the 2019 State of the Nation speech, which can be accessed here.

In its investigation, Namibia Fact Check determined the following: 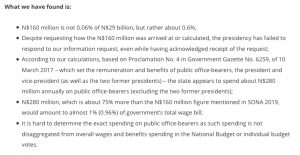 Namibia Fact Check calculated these figures and explanations because State House did not respond to numerous requests for clarification of the percentage quoted and what wage data it was based on, in the days and weeks following the State of the Nation event.  The calculations used salary and benefits figures gazetted in Proclamation No. 4: ‘Determination and announcement of remuneration and benefits of Public Office-bearers, President, Vice-president and Former Presidents: Public Office-bearers (Remuneration and Benefits) Commission Act, 2005 and Namibian Constitution’.

In light of this latest figure – the percentage of the public service wage bill made up by the salaries and benefits of political office-bearers – being cited by State House press secretary Alfredo Hengari without providing details that speak to how the figure was arrived at, and because a markedly different figure was earlier cited, the accuracy of the figure remains unproven.

Politicians account for much more than 0.06% of Govt wages