Quotes purportedly emanating from past world leaders are all the rage as political memes, but are almost always falsely attributed.

In the wake of the 27 November 2019 presidential and National Assembly elections in Namibia political memes of quotes falsely attributed to past world leaders have been making the social media and WhatsApp rounds as a commentary on Namibian electoral process.

One such popular political meme which appears to have been widely shared especially in and among WhatsApp groups is a quote alleged to have come from former Soviet dictator Joseph Stalin.

Stalin is quoted as having said:

There are slight variations to this quote in some political memes, such as the following: 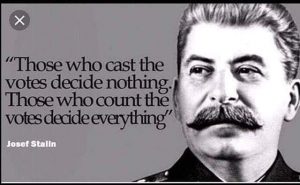 However, despite the popularity of the quote and its attribution to Stalin, there appears to be very little or no evidence that Stalin actually uttered the words.

In a March 2019 article debunking the attribution of the quote to Stalin, Politifact stated:

Plenty of other places cite Stalin as the person who said this, but we couldn’t find any credible, original sources explaining the attribution. So we reached out to the Stalin Digital Archive, an electronic database of documents and images that resulted from a collaboration between the Russian State Archive of Social and Political History and Yale University Press.

A search of the archive didn’t find any matching quotes, the archive’s support staff told PolitiFact in an email.

Snopes.com wasn’t as certain that Stalin wasn’t the source of the quote, stating:

While it would be a bit of a stretch to assert (given the vagaries of translation, the unreliability of memory, and the existence of earlier examples) that the sentiment “The people who cast the votes decide nothing; the people who count the votes decide everything” originated with Stalin, there is at least some evidence that he once said something like it.

Despite this, it appears that the Stalin attribution, which has been around for over a decade, is almost completely false.

Another political meme, which has been making the rounds in the wake of the 27 November 2019 elections in Namibian is a quote meme attributed to former US president Harry Truman.

Truman is alleged to have said the following:

While there appears to be little or no evidence that Truman actually uttered those exact words, TruthorFiction, in an October 2019 article, nevertheless took a cautious note, stating:

That quote appeared to be — at best — a paraphrase of a 1954 diary entry, in which Truman wrote that an “honest public servant can’t become rich in politics.”

These are not the only past world leaders that have questionable or disputable statements attributed to them.

It is incumbent upon social media users to engage critically with such viral political memes and to not just accept that they are correctly attributed.