No, the WHO will not take over the world 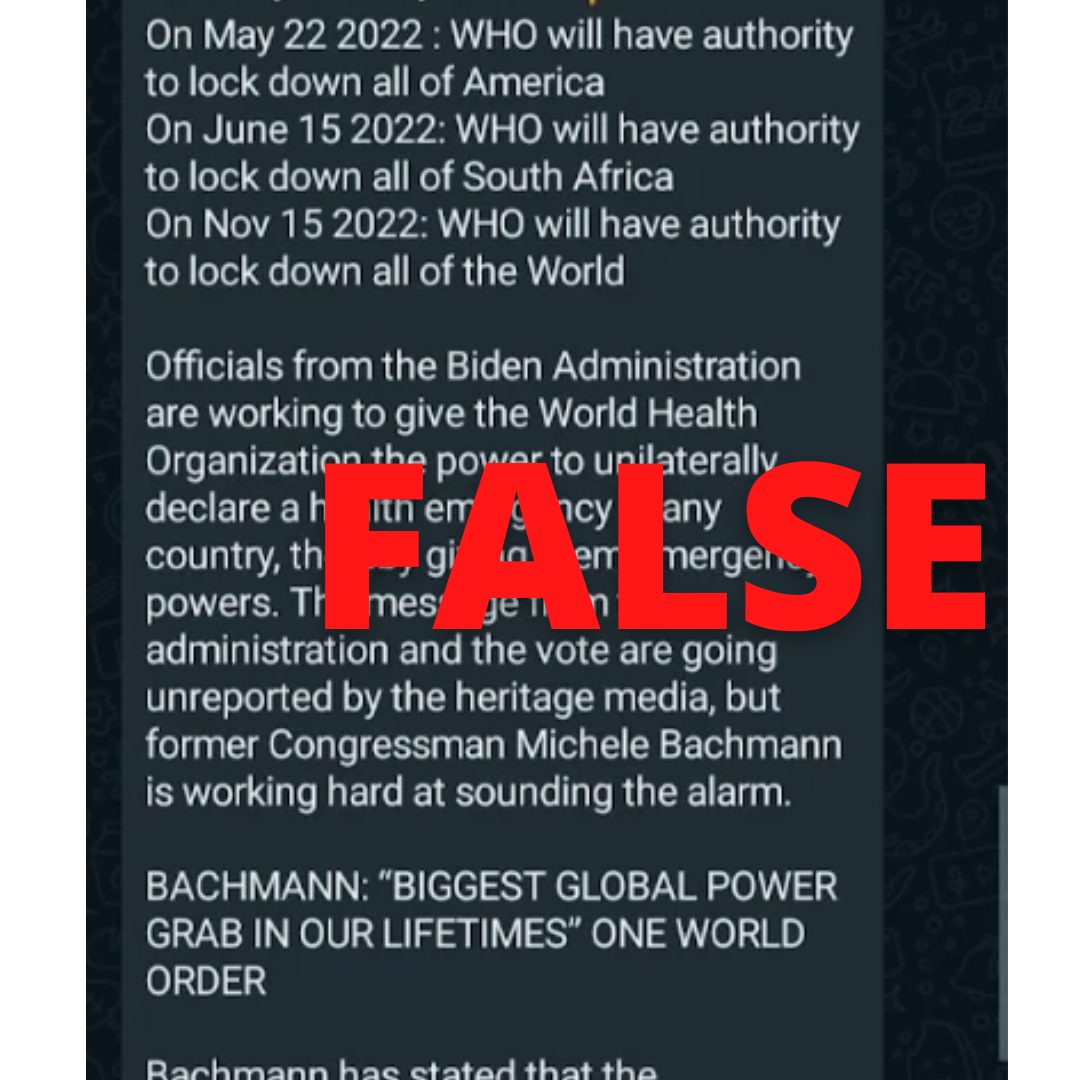 False claims about the global health body grabbing power continue to circulate despite no evidence of it happening as per a claimed timeline.

So, this is a version of the ‘pandemic treaty’ conspiracy theory that keeps surfacing in different forms.

Last month, on 3 June 2022, Namibia Fact Check published a general debunk of the ‘pandemic treaty’ conspiracy theory (see the link below), pointing out that the conspiracy theory of a World Health Organization (WHO) global “power grab” emanated from baseless statements made by former US Congresswoman Michele Bachmann in an interview on 9 May 2022. Bachmann’s false statements have since been amplified by what are called ‘right-wing media’ in the US, and have filtered into global social media spaces where they have been circulating for over a month now.

The latest of the Bachmann ‘pandemic treaty’ conspiracy theory posts, that has been viral in Namibian WhatsApp groups, was forwarded to Namibia Fact Check in mid-June 2022.

This post – for which there is no author identified – states that the WHO “power grab” was part of the “New World Order” conspiracy, and claims that the WHO would have authority to “lock down all of the World” by the very specific date of 15 November 2022.

Michele Bachmann’s misleading and false statements, and the ‘pandemic treaty’ conspiracy theory, are a reference to the Biden administration’s proposed amendments to the International Health Regulations of 2005. Amendments to the International Health Regulations were discussed at the 75 World Health Assembly, that took place in Geneva, Switzerland, from 22 May to 28 May 2022.

There are two specific claims in the post that Namibia Fact Check looked to debunk:

In the first instance, “May 22 2022” seems to be a reference to the date on which the 75th World Health Assembly kicked off, and there is no evidence of any powers awarded to the WHO on that day to “lock down all of America”. Similarly, Namibia Fact Check could find no evidence of any power or authority handed to the WHO on 15 June 2022 to “lock down all of South Africa”.

There is, in fact, no evidence of a “global power grab” by the World Health Organization (WHO) and Michele Bachmann did not present any evidence of such at the time she made the false statements or since. And neither has the person(s) who made and shared the false post provided evidence for “power grab” on 22 May 2022, 15 June 2022 or 15 November 2022. And, in fact, on 23 June 2022 it was reported that South Africa had repealed all its COVID-19 emergency rules.

For an informative analysis and debunk of the Bachmann false claims and the “power grab” and lock down claims of the anonymous post author(s), read this Lead Stories article.